Here are excerpts from my memoir to go with James Collett’s excellent photo of a boat abandoned in Campbeltown Loch. To set the scene, I am 13 and am getting used to having a stepfather. An Irishman from Larne, Bill Moorhead had just married my mother, Chrissie Morrans. You might say that an abandoned boat in Campbeltown Loch helped to knit our relationship. 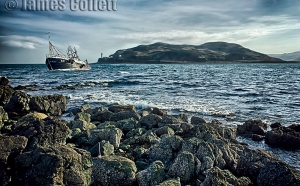 Quoted from “From Poverty to Poverty: A Scotsman Encounters Canada” by Ian Moore-Morrans, copyright © 2012. Friesen Press.

So many of James Collett’s photos remind us of stories from Ian’s memoir, “From Poverty to Poverty: A Scotsman Encounters Canada.” This photo that James just posted brings to mind Ian’s story of his stepfather Bill Moorhead building a boat from the remains of a wrecked vessel abandoned on the shores of Campbeltown Loch. We’ll post pertinent excerpts from the book along with this reposting of James Collett’s photo on our website: ianmooremorrans.com. Thanks for sharing another amazing photo, James.