This is Gayle Moore-Morrans blogging. We previewed most of the chapters of Ian’s children’s chapter book, “Jake, Little Jimmy and Big Louie” on this site last year and asked for some feedback from others as well as asking two of our great-grandchildren for input prior to publication – — Now-13-year-old Leland for consultation on the appropriateness of the book’s contents for his age group and now-8-year-old Hannah for some drawings to illustrate the book. In our post of March 21, 2013 I blogged Leland’s review entitled: “Wow!” A Recommendation for Ian’s blogged book, “Jake, Little Jimmy and Big Louie.” I’m now ready to re-scan Hannah’s illustrations for the book as I’ve edited them on Microsoft Paint. Our new printer – an HP OfficeJet Pro 8600 is finally installed and ready for me to do the layout. Here is a preview of the book’s cover illustration showing the boy Jake, and, on his shoulders, his BFFs, Little Jimmy the budgie and Big Louie, the raven. 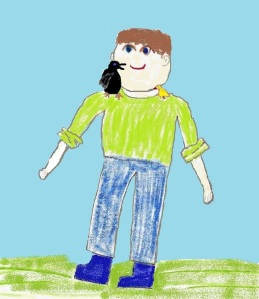 I’ve usually been identified as Ian’s editor, blogger, publishing and marketing person. How should we recognize my role in this children’s book that has evolved over the years it has been in the making? Am I just the editor or am I also the co-author? In our previous post I re-blogged a very helpful post by Francis Guenette on how she is writing with her mother even though her mother is no longer living. That prompted me to reply to her my thanks for answering a question that my husband Ian and I have been mulling over the past months.

Here are my comments on Francis Guennette’s blog post “Writing with My Mom.”

Wow, did your blog post on writing with your mother ever resonate with me, Fran! In fact, I feel it has answered a few questions I’ve had in the past year. As you know, our blog is mostly about my husband Ian’s writings. When I started out editing his stories about nine years ago I had just retired from my editing job, we had only been married a year and soon headed for Mexico in our motor home to explore retirement there. I relished getting to know him better through his writings, especially becoming familiar with his impoverished upbringing in Scotland during the depression and war years, his military service with the RAF in Egypt and his early marriage and fatherhood and then immigration to Canada. Editing that book was a true editing job in that I took his words and only changed them for grammatical reasons when necessary but then rearranged large chunks in a much more logical sequence as he had pretty much written it in a “stream of consciousness” fashion. When I found there were gaps or inconsistencies I returned the manuscript to him for additions and clarification. Though Ian was in his early 70s then, he was in robust health and had energy to burn. When he wasn’t writing he was entertaining by performing Scottish songs or teaching me his repertoire so that we could sing and perform together.

That way of working cooperatively continued after our move back to Canada two and a half years later. But it lasted only for a little over a year when a sudden illness brought him to death’s door and a long hospitalization, much of it while he was in an induced coma. Recovery from the near-fatal illness was a slow process. He was kept alive and healed by over five years’ treatment with prednisone; however, it is basically a poison which wrecked havoc on the rest of his body. A heart attack in 2010 necessitated five stents in his arteries and another regimen of medication, exercise and diet changes. Now at 81, he is pretty much a recluse, rarely sings, no longer writes and rarely even reads. He sleeps a lot and is lucid mostly late afternoons and evenings but doesn’t have the energy to do much with his pile of writings which still need to be published, nor has he been able to do anything about promoting those which have already been published.

That’s where I come in. I’ve put aside the pile of writing I’ve done over the years, mostly on spiritual insights and family history and feel it is my “labor of love” to try to get the rest of Ian’s writings edited and published. However, as you’ve found with your mother’s writings I have been grappling with the fact that I no longer can ask Ian to do re-writes when I feel they are warranted. Like you said with your mother’s work, “I began to make changes and what I was doing was much more than editing.” Ian and I have discussed how to address the authorship of the next book which I hope will be coming out soon. Granted, he is the main author. He originally wrote the children’s story, nursed it through a number of revisions over the years and had sent it to several publishers even before I met him. It was hung up on the need for editing though. I now have done the editing but have also made a number of changes in the story and added a spiritual component to it which I felt was lacking and needed. It no longer is just the story that Ian wrote. I’ve also recruited our 8-year-old great-granddaughter to do the illustrations for the book and have extensively adjusted those illustrations using Microsoft Paint to make them more consistent and the characters more uniform. So how do we identify the authorship of the book? Ian and I have discussed this and have tossed around listing a co-authorship or a “with” authorship such as “by Ian Moore-Morrans with Gayle Moore-Morrans.” We’ve thought that perhaps the former gives too much credit to me and perhaps the latter makes it look as if Ian had a ghost writer (which certainly isn’t the case).

I found your remarks helpful when you stated, “I will put the book out in both our names and claim co-authorship for my mom’s stories – though her name will appear first. No matter the work I’ve done, the one who came up with the ideas and the characters deserves first billing.” So I’m feeling more at peace with the “by author with another author” claim.

What a great legacy your mother has left you and how wonderful that you can keep her memory so alive by working with her writings. I have the added advantage of still having Ian here with me so I can toss ideas and solutions around with him even though he can no longer physically do the re-writes and adjustments. I can even do future book readings and promotions for him without having to take along videos of him reading from the particular book. (Something I did twice in 2012 when I was able to travel to the States to do book readings/sales for Ian when he was unable to travel there because he couldn’t get travel insurance to go out of Canada.)  In addition, Ian has added an addendum to his will granting me full ownership of his writings, both published and unpublished and free rein in pursuing publication of any as-yet unpublished writings of his.

I wish you well with your co-authorship adventure with your mother and plan to re-blog this latest post of yours on our blog at ianmooremorrans.com. Thanks for your insights.

3 thoughts on “Am I a Co-Author or Just the Editor?”