This posting is being done by Gayle Moore-Morrans, Ian’s wife, editor, publicist, etc. as Ian is hospitalized at present and waiting for an Endoscopic Retrograde Cholangiogram and Pancreatogram, better known as an ERCP.

Tests have indicated a possible blockage or stones in a liver duct and this ERCP should be able to extract the stones or insert stents to clear the blockage. Yesterday he was in good form, joking and visiting with his roommates and also selling copies of his books to hospital staff and visitors. Today he was not feeling as well and actually fell asleep as I was visiting. At least he’s getting a rest.

Since I’m the one who has developed this blog for Ian and do most of the manual labour to put this on the website, I’ll take the opportunity of his absence to post the review of his novel that I recently entered on Goodreads, a great site for readers. I recommend it to anyone interested in reading and passing along or getting book recommendations. I’ve found it a great way to connect with the world’s largest community of readers. 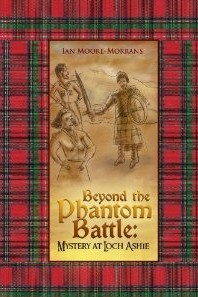 *****Review of “Beyond the Phantom Battle: Mystery at Loch Ashie” by Ian Moore-Morrans. Posted by Gayle Moore-Morrans on Goodreads.

*****A tale of adventure, time travel, fantasy, historical fiction and romance set in the Scottish Highlands. As I’m married to the author and have edited the book myself, perhaps I’m a bit prejudiced. However, I don’t think you’ll find a better read that will take you from the 21st Century back to the 12th Century when Vikings were invading the Scottish Highlands. The author grew up and lived in Scotland, in some of the area of which he writes. Geography buffs will enjoy his knowledge of the highland area from Inverness south to Argyll. Historical fiction buffs will enjoy his depictions of 12th Century Scots and Vikings. Fantasy buffs will relate to his turning the historical claim by “witnesses” (to have seen a ghostly conflict taking place over the years around the first of May at Loch Ashie near Inverness) into a tale of two brothers from Edinburgh traveling to that lake and attempting to witness the battle for themselves. Adventure enthusiasts will thrill to the battles, intrigues, trials, discoveries and voyages the brothers endure. Fans of the supernatural will relish the character of “Ancient One” or “Aeoh” as the brothers call him – a wizard-like being with both good and evil powers which he uses with gusto. There is also a wee bit of romance as the brothers fall in love with two 12th Century lassies. Mystery buffs will speculate if Aeoh will really succeed in helping them to return to the 21st Century. Readers invariably mention how they enjoyed the surprise ending.

While I was laid up at my daughter’s house in Winnipeg this summer, my wife and editor, Gayle, made a whirlwind book reading tour to North Dakota and Minnesota. She visited her two sisters and did a book reading at each of their homes, to which they invited friends and other family members from the area. A longtime friend of Gayle’s from her days in Heidelberg, Germany in the late 60s, Leah Droubie, also came to the Frazee event all the way from St. Paul, Minnesota. Thanks, Leah, I’m sorry I didn’t get to meet you but have heard all about your visit. The slide show includes a photo of Gayle and Leah  displaying the two books which were featured.

If you are wondering how Gayle managed to pull off a book reading and signing without me being present, hears how: I signed a couple boxes of books before she left, leaving space for her to personalize them and also add her name as editor. I really did read from the books, though not “live.” We had recorded several videos of me reading from various parts of “From Poverty to Poverty: A Scotsman Encounters Canada” at a previous book reading in Vernon. She also showed a book trailer video that had been made for my novel, “Beyond the Phantom Battle: Mystery at Loch Ashie.” After showing the videos she then answered questions about the books.  Though this was an experiment, Gayle tells me it worked well.

At her sister Barbara’s house the first glitch was that Barb didn’t have wi-fi on her Internet. However, Gayle was able to “borrow” Barb’s neighbour’s wi-fi, bring the U-tube videos up on her iPad and then hook them up to Barb’s television. Slick!

The next day, Gayle was able to use her sister Doreen’s laptop computer to show the videos. Not quite as good as using a large TV, but adequate, as they had a smaller audience. Luckily the sales were similar, as attendees at the latter reading were buying for others who weren’t able to come. Thanks, Gayle for your efforts. I’m glad you were able to see your sisters again, visit with other friends and relatives and also have a nice boat ride on a Minnesota lake.

You’ll notice some amused reactions among a few of the guests. This was in response to the story I’ve named “More Than Slightly Sloshed” from the autobiography. It tells of my first leave home to Campbeltown after I had joined the Royal Air Force and of my first and only encounter with my Irish stepfather’s “poteen” or home-brewed whisky. Janice, we especially love your guffawing and glad Gayle could capture it for the record.