A note to retired musicians: Here’s a way to display musical instruments that may have been played for years, are no longer in use but can still be enjoyed. We’ve included longtime bandsman Ian’s antique trumpet and a chanter used for those who want to practice the bagpipe but not make too much noise as well as a number of percussion instruments Gayle used when keeping time with a ukelele band, including a Celtic bodran and tipper, a hand drum, tambourine, a set of maracas, carved wooden spoons and a rainstick. Also included are photos of Ian posing with a trombone he played in a military and Salvation Army band, playing lead trumpet in a Royal Air Force band in the former Suez Canal Zone, of Gayle with her ukelele band and of us singing duets at a Robbie Burns’ party and as the duo “Okanagan’s Mr. Scotland and His Bonnie Lassie.” Displayed nearby are two trophies Ian won in years gone by for singing Scottish songs.

The crowning piece is the last trumpet Ian still owns. It has been about 12 years since he  gave up playing but Gayle has finally convinced him that he needs to polish up his trumpet, at least for our display. So here he is with a bottle of Brasso and some soft cloths starting on what is going to be a huge task. He found the trumpet years ago in some antique or thrift shop and found out it was made in Winnipeg probably in the early days of the last century. We could hardly see the manufacturer’s etching on the trumpet’s bell but after the initial polishing attempt can read “Premier Williams Winnipeg” and further on down the bell a large number “37”. We’ve heard a few squawks from it so far. Ian’s lip (embouchure) is sorely out of practice! However, we were both pleased that he had awakened an interest in the trumpet again. (Gayle is not going to hold her breath until the trumpet polishing is finished!)

Ian documents his early years of music making in the Salvation Army and RAF in Scotland, other parts of the UK and in the British military sector of the Suez Canal Zone in Egypt in the early ’50s in his first memoir “From Poverty to Poverty: A Scotsman Encounters Canada.” Gayle is now editing the second memoir “Came to Canada Eh? Continuing a Scottish Immigrant’s Story” where further music making will be documented in Canada. A third memoir, written by both of us entitled “Mexican Follies” tells of the beginnings of our colloboration in music-making and in jointly producing books. Publication plans for that depend on how quickly Gayle gets to the editing. For her, there is never enough time and too many interruptions but little by little she hopes to get to publication again – some day!

Below is an excerpt from “From Poverty to Poverty: A Scotsman Encounters Canada” which tells a comical story about Ian’s attempt to “show off” with his trumpet to his new wife:

The following Saturday night, our dance band was playing at Forres Town Hall. I had been bragging to Mary about the introduction to the song, “Cherry Pink and Apple Blossom White,” that I played on trumpet, standing up, before the rest of the band joined in. It consisted of the first three notes, then into a big glissando, using the third valve slowly, to go down and then up to the third note again and then continuing right into the melody when the rest of the band joined me. It was just a copy of what a big-time trumpet player (Maynard Ferguson) of that era did. Everyone thought it was very effective, sounding and looking quite professional. So, there I was saying, “Wait ‘till you hear me play!”

Saturday night came and my Mary was sitting at the side of the hall, close to the band, her eyes firmly fixed on “Lover-Boy.” Then it was time for me to shine. I stood up, the first two notes came out correctly, but I have no idea what happened to the bit where I was supposed to do the fancy stuff. I played absolutely terrible! The rest of the band started all right, but I had to sit down with a very red face—even redder than usual! In front of my Mary, too! You know, I must have played that “intro” at least 40 times previously without fail. (That’s what I get for trying to show off, eh?)

Ian is playing a cornet in this photo, but about a year or two before his trumpet story above. A cropped version on an RAF photo, ca. 1952. 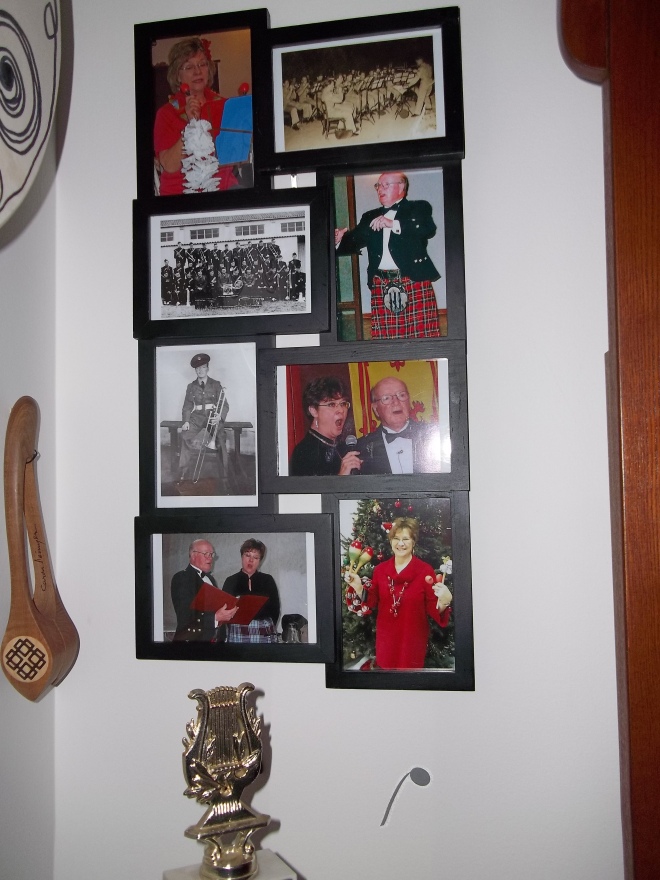