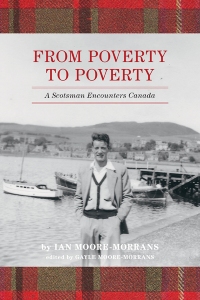 The photo you see on the cover of my latest book was taken of me when I visited my hometown, Campbeltown on the Kintyre Peninsula, Argyllshire, Scotland in 1957. It shows a lots-younger-and-leaner me with Campbeltown Harbour in the background.

Many folk have been curious about the title of this book and how I came to write it. If you click on the page bearing the book’s name at the top of my home page, you can read a synopsis of the story and the title will become clearer.

Here I’d like to address those curious about how I came to write the book by quoting the book’s preface:

“My principle reason for writing my autobiography is that I have
met so many people on the Canadian side of the Atlantic Ocean
whose backgrounds are Scottish, English, Welsh, Irish or whatever,
who have no idea who their grandparents or great-grandparents
were, what they did or how they lived. Thus I decided
that my descendants, friends and even strangers should get to
know me, if they so desire.

“Several times I’ve found myself checking out through a
grocery counter and spoken a few words to the clerk. Upon
hearing my Scottish “burr” (folks over here think that Scots
speak with a “brogue”—no, that’s Irish!) she would invariably
ask me if I were Scottish and then tell me that her grandfather
(or grandmother) was Scottish. When I asked her where he or
she was, she would then tell me the relative was dead. When I
inquired where in Scotland they came from, she didn’t know.
She didn’t know anything about him or her—and that happened
more than once. On arriving home one day from a little
bit of grocery shopping, I told my wife, ‘I’m going to write my
life story for my descendants to read—they should know who
and what their grandfather did while he was alive.’ So here is
the first volume—all done and delivered!

“This book may not always be chronologically correct. As I
searched my memory, I wasn’t always sure what things happened
in the same time frame or exactly what age I was when
something happened. However, nothing has been embellished
or intentionally made brief. What I have written is exactly as I
remember it, albeit sometimes a trifle fuzzy. I have occasionally changed a person’s name to maintain their privacy. The only incorrect information might be a street name spelling or a slight error in a date; but be assured that all that is included really did happen. It is my life, written with the express intention of filling in information that will not be accessible after I am no longer living. I’ve tried to remember the good times, the bad times, the funny times and the sad times, from 1935 until 1970. The second volume (“Came to Canada, eh?”, as yet unpublished) will cover the years 1970-2004, maybe even later than that if I continue living and writing. My present wife and editor is urging me on to book three!

“Most of this story was written when my name was still ‘Ian
Morrans.’ (The name on my birth certificate is ‘John Morrans’
but I was always called ‘Ian,’ the Scottish Gaelic equivalent
of ‘John.’ Sometime after I immigrated to Canada, I legally
changed my first name to ‘Ian.’) My name change to ‘Moore-Morrans’
happened in 2003 when I remarried after I lost Mary,
my first wife (who was living when I wrote most of the first two
volumes of this autobiography). The maiden name of Gayle, my
new wife, is “Moore” and she wanted me to add it to my family
name, which I gladly did. This was a bit of a coincidence as
my stepfather’s name was similar—’Moorhead.’ I suspect all
three names (Morrans, Moore and Moorhead) have an ancient
common root in the Celtic languages.”

4 thoughts on “About “From Poverty to Poverty: A Scotsman Encounters Canada””