Through the years, Gayle has shared the following with friends who are recovering from accidents or lengthy hospitalizations. Sunday she learned another friend was coping with a fractured ankle after falling on skies as she was getting off a chair lift and was jostled or startled by an over-anxious skate boarder. Here’s to a good healing, Pat! Gayle can’t blame a skate boarder for a previous accident she experienced. She was the over-anxious one wanting to spy a bird building a nest on her roof. And she never did see the darn bird! Perhaps this is what it looked like.

One fine Manitoba day in early May 1999, I eagerly awaited getting home after a long day at my editing job. After seven months of winter, Winnipeg was a glorious place to be and I planned to spend a long evening on my deck enjoying the warm air, extended sunshine and birdsong. As soon as I walked in, my daughter excitedly shouted, “Mum, you should check it out. I think a bird is building a nest on our roof.”

Of course, I can never leave well enough alone, so had to immediately trot out to the deck to investigate. I jumped up onto one of the benches surrounding our hexagonal deck table and then onto the table, but wasn’t close enough to view the roof. Jumping down, I hauled the table and bench closer and again hopped up onto the bench and then to the table. This time, however, I landed on a corner where there wasn’t a table leg. Down I crashed—all of three feet, mind you—slamming my right leg on the bench and landing wedged against the railing of the deck on my back with my right arm pinned under me. My frantic screams quickly brought my daughter and next-door neighbours to the scene. Soon the fire department and ambulance service arrived. I have little recollection of their rescue other than a vague feeling of horror as they threw all the furniture off our high deck and struggled to get me into a neck brace and stretcher, down the ten steep steps to the back yard and into the ambulance.

All this resulted in seven and a half hours of emergency surgery to repair what turned out to be seven breaks in the right ankle, knee and upper arm. I woke up in considerable pain with 17 pieces of metal in me—a rod and screws through the humerus, a four-inch plate in the fibula, bolts to try to hold the crushed tibial plateau at the bottom of my knee together, numerous screws to keep all these things in place, and, of course, a huge leg cast and arm immobilizer. Because of the multiple breaks it was a long time before I could get out of a wheelchair and onto crutches. My doctor declared me “architecturally challenged” because my bi-level house necessitated going down eight steps to the lower level or up eight steps to the upper level. Thus, I was destined to spend three and a half months in hospital, only being discharged in mid-August when I could finally maneuver steps on my crutches.

Most of my fourteen weeks was spent in a rehabilitation hospital, braving four hours of physiotherapy daily and gradually adding occupational and hydrotherapy sessions. I learned quickly, however, that my injuries were minor compared to most of my fellow patients, the majority of whom had suffered severe strokes, spinal cord injuries, complications from multiple sclerosis or loss of limbs due to accidents or diabetes.

What kept me relatively sane throughout all this was my editorial job. Luckily, my quarterly magazine was due to go to press a week after my accident and most of my work had been done. Our publisher quickly secured the services of one of our writers to complete my editorial and put the thing to bed. One week later I started serious work on the next issue, clumsily using my left hand and the telephone. Soon I became a one-hand whiz on my laptop computer, with the modem enabling me to communicate with writers, the office, our art designer and printer, aided by daily visits from our secretary who delivered papers back and forth. The hospital staff got quite used to me burning the midnight oil at the computer, probably considering me a bit nuts though they were very supportive as long as I didn’t keep my three roommates awake.

I’d like to share with you my editorial for the Fall 1999 issue of Esprit, the magazine of Evangelical Lutheran Women. The magazine is thematic and, as coincidence would have it, the theme for the issue which was finishing up just as I left hospital was “Body and Spirit.” I entitled it, “Life’s Lessons Reinforced.”

“Beginning to write this column brings me full circle since the last issue of Esprit. Then, my horrendous fall and seven breaks in right leg and arm bones resulted in the need for someone else to write this column. Now, after 14 weeks in hospital (most of it in rehabilitation), I have two more days before going home and this editorial is due. What a place this has been to glean ideas for the topic, “Body and Spirit!” I would not have chosen the classroom, but every minute in this environment has reinforced some important lessons in life.

“Lesson #1: I am a combination of body and spirit—an integrated whole that cannot be divided into neat categories of spiritual, emotional or physical. Wound the body and the spirit is wounded. Wound the spirit and the body is often equally affected.

“Lesson #2: It’s OK to cry. Roommates or caregivers need to allow one the chance to release emotions without feeling that the crying has to be explained or “fixed.” And, I needed to give myself permission to cry without feeling guilty or “stupid.”

“Lesson #3: Private moments are precious. I only realized how much so when I didn’t have any. Grasp them, however and whenever they come.

“Lesson #4: The social part of my humanity is equally important. The need for others is as basic as food, water or shelter. The warmth and touch a person receives or doesn’t receive from family or friends can have a profound impact on healing. What a contrast I saw in the progress of two roommates who had had similar strokes. One had no family present. Her four children, in another province, neither visited nor wrote. One son called a few times, promised the doctor he’d visit and take her home with him and then never showed up. Only one friend ever visited and then rarely. Her body healed enough to leave hospital but her spirits were low. The other woman, an Inuit from the far north, arrived with eight family members in tow. They attended therapy sessions with her, assisted in her care and kept her in their midst except for sleeping. Despite considerable disability and almost complete lack of English skills, she progressed with a cheerful demeanor, appearing confident and content.

“Lesson #5: Communication is a wonderful release. If someone will listen, it’s good to be allowed to unload a frustration, share a pain or rejoice in an improvement. When I’m the one feeling up to it, it’s also important to allow the other person to unload on me.

“Lesson #6: God loves a cheerful caregiver—and so do patients. Caregivers love a cheerful patient as well—but patients often find it hard to be cheerful all by themselves. Cheer travels, though, so let’s start with the caregiver.

“Lesson #7: Many of us who have prided ourselves as caregivers have a hard time accepting having to be cared for. It’s a humbling experience to have to ask for everything one needs. Proverbs tells us “humility goes before honour.” However, it sometimes takes a little assertiveness to make your needs known—one shouldn’t be too humble to ask.

“Lesson #8: The little things in life can give the greatest pleasure. When progress towards healing is slow, it’s important to note each little step forward. How uplifting it can be to have a therapist point out the centimeter improvement in bending or straightening a broken knee or the slight movement of a stroke-paralyzed hand. A woman I’ll call “Jane,” silenced by brain injury, one day surprised us by suddenly singing out, “When you’re smiling, the whole world smiles at you!” How we celebrated those words, even though it might be a long time before she could repeat them.

“Lesson #9: The spirit of God dwells within me. The chances for meditation and interaction with the source of my being are endless. The Lord’s presence is there whether I’m lying on a stretcher in a speeding ambulance; being anointed with oil in a healing ritual before surgery; chanting silently God’s assurance from the book of Isaiah, “You are precious in my sight, and honoured and I love you” (Isaiah 43:4a) while painfully trying to turn the arm ergometer; anxiously taking the first steps on crutches; talking about losses and gains with my roommates; suffering neglect from too-busy medical staff; receiving a hot pack or massage from caring medical staff; praying behind curtains closed around my bed nook; or lying sleepless gazing at God’s beautiful night of moon and clouds outside my window. God is always there to sustain and comfort me. It’s good to be healing in body and spirit. Praise the Lord! 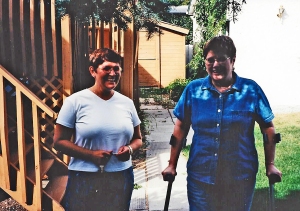 August 1999, Finally home after 3 1/2 months in rehab. Gwynne, just back from a summer in Norway and Gayle on her crutches. At left is part of our high deck and the steps I had to be carried down on a stretcher in May.