The next weeks and months will mean continuing on with keeping my nose to the computer and now dealing with their publishing consultant.

I’ll keep everyone apprised of the progression.

Title of the book: “Came to Canada, Eh? Adventures of a Scottish Nomad.”

It covers Ian’s astounding adventures in the years 1970-2004, including the many moves all over Canada of Ian and his first wife, Mary, Mary’s death in 2002 and our whirlwind romance and marriage in 2003 prior to our move to Mexico in 2004.

On February 22nd it will be exactly a year since Ian passed away from a sudden stroke.

Bringing this book to fruition has helped the grief process and kept him close to me.

Here’s a photo of “traveling Ian” eagerly arriving at Glasgow Airport on a visit to the Old Country in 2000. 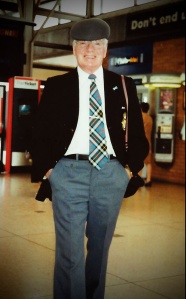 9 thoughts on “Coming Soon: Came To Canada, Eh? Adventures of a Scottish Nomad”